I cannot do this alone.

This probably should have been listed as lesson#1.   I would have had serious issues with animals running out of water this summer were it not for the fact that the younger daughter was at home most of the time and was therefore able to check all the waters around mid afternoon.  That one thing alone turned out to be a weak point in the whole set up.

I actually went into the summer knowing it would be an issue, but just didn’t create a contingency plan to deal with it.  Last year, when I was still working at the local library branch down in the village, it was a 3  minute drive home – plenty of time on my lunch break to nip home, throw jeans on, add water to all the pens, and whip back to work with time to spare to swallow a sandwich.  Now that it’s 15 minutes one way, it’s still possible, technically, but not super practical.  Yet this was the thought in my head at the start – if no one was home, that’s what I would do.   And when I did have to put it in practice a few times, I quickly realized how unrealistic the plan was.  15 minutes each way, plus 20 minutes doing all the waters, plus 5 minutes to find a parking space again when I got back to work – it was a tight race.  If I ran across an issue while I was doing the waters what was I supposed to do?  Ignore it and get back to work on time?  Call work and say I had an issue to deal with?  My supervisor is incredibly supportive of my farming activity and has said more than once that I can do just that, but I don’t want to abuse the privilege.    Planning to handle it on my own was not a good plan.

Younger daughter now has a job herself that will likely involve way more hours during the summer months.  She’s not an option I can rely on next time.  So what should I do?  What is the real issue?  Do I need a person to be there at midday to do the waters?  Could I set up the waters so that they don’t run out?  My other daughter has suggested having two waters per pen, at least during the day, a practical suggestion that should be simple to implement.  It might mean reducing the number of birds per pen a bit because of the space, but I believe it would be worth it.

It’s not just the water.  During brooding, the chicks need checking several times daily.  When it’s butchering day, catching the birds goes a lot faster with two people, and I’m not strong enough to lift a poultry crate with 8 birds by myself, so someone has to be up at 4 in the morning to help me catch and load 20 crates worth of birds and unload them a couple of hours later at the processor. On customer pick up day, with fresh chicken and the need to keep it chilled, there is only about a 2 hour window between pick up at the processor and having the chicken in my customers cooler or fridge.  Some customers come direct to the farm to pick up, and about half meet me in town to pick up, which means one person stays at the farm and one person goes into town.   Astute readers know that I don’t own a truck, so transporting the birds to the processor has meant either renting or borrowing one – borrowing is cheaper (1 chicken or a small ham) but means that I’m depending on someone for yet another aspect of this enterprise.  I’d love to get a truck, but the reasons why I haven’t done that yet are numerous, so I’ll spare you.

Even more important than the physical requirement for an extra set of hands and muscles, however, is the benefit of companionship.  Someone to talk over the issues, brainstorm for solutions, commiserate over the bad stuff that sometimes happens.  Someone to crack terrible chicken jokes with, who will enter into plans for improvement and sees things from a different angle, but can still see mine as well.  This of course applies not just to broilers, but to life – although maybe not the part about chicken jokes.

So I’m not completely sure about long term prospects for the broiler enterprise.  My plans to expand this enterprise are all well and good, but without a second person available at least at certain points, it will not work.  Whether I tap into my local community and neighbours for that, or rely on family, or hire someone, that second person is essential.  Part of this depends on scale – like any small business.  I could affort to hire someone for an hour/day if I was producing enough to pay for them.  To produce that much I need to hire someone.   Part of the reason for working my way through my lessons learned in such detail (sorry, but thanks for sticking with me!), is to determine whether I’ve mastered enough of the basics to be able to take a big enough step up in scale to hire someone to help.  The answer at this point is – I think so.  Do I want to do that?  Still thinking about it.  What would you do?

p.s. Sorry for all the recycled pictures from previous posts for this series – I simply didn’t take very many pictures this summer, and didn’t want to post such long screels without decorating them in some way 🙂

Bedding in the brooder.

Again, I think this is one of those lessons I’ve been trying to master for more than a few years, and this year was the first time I feel like it went as it should.  I try to practice deep bedding, but whether it’s my brooder set up, or the wood shavings I use (about all that’s available here, at least through the feed stores), or my management techniques, I am usually in a desperate and losing battle to keep the bedding in the brooder from feeling soggy.  These little birds excrete a LOT of moisture and it takes a lot of wood shavings to absorb it all.  Others around the world are using different beddings, and some sound like they work much better.  I’d really like to source a finer grade of wood shavings, as I believe it might absorb better, but I’m not sure how to go about that, so it may not happen soon.  Ideas, anyone? 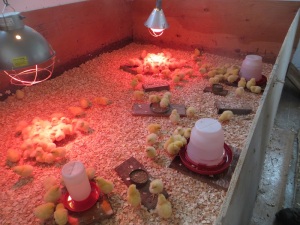 In the past I’ve tried removing half and replacing (a lot of work and it panicked the birds) it with new shavings.  I’ve tried adding shavings daily and stirring them in.  I’ve tried adding shavings twice a day.  This year, I was adding bedding in the mornings, quite a bit of it each time, over the whole floor space –  a few centimetres deep.  Didn’t stir it, just let it sit on top.  I also made sure the place was always ventilated (even at night), thinking that perhaps the moisture was building up overnight because the shed is insulated.  And I think that may have done the trick, because for the first time since I’ve been using that building, the bedding got damp, but not soggy, I didn’t get any respiratory issues with the birds (a problem in the past),  Having that window open 24/7 (it’s away from the brooder, so no draft, and it has mesh, no rats) did rely on the hot dry weather of August, so this is another point in favour of starting chicks end of July.

Another factor of course was that this was the shortest time I’ve ever kept the broilers in the brooder – 12 days for most of them (I kept a few inside for a couple more days), and I know in the past the weather has compelled me to keep them inside the brooder for a week or so longer.  They start getting big after week two, and their size has a big impact on my ability to keep up with the bedding.

As a sort of postcript to all this, I let a broody hen from the layers set a batch of eggs this summer – 9 of the 12 hatched, and she raised all 9 successfully.  Her own body temperature was all the heat they got, and even when the ground got damp from rain, the chicks always thrived – her own body heat and the thick pad of hay they had for a nest seem to have sufficed.  She had them venturing out of the brooder within a week, and by the end of week three, they were going through tall grass, and under brambles, scrambling over and under and around to keep up with her.  Watching those chicks while I was providing all my careful TLC to the broilers across the yard in their brooder, I am aware as never before of just how fragile we have bred them to be.