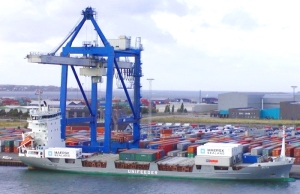 Canada has begun shipping hay to China, according to this report.  The report also highlights Canada’s involvement in China’s growing dairy industry and mentions how the “Government of Canada is delivering on its commitment to agricultural co-operation with China”.  This first shipment of hay was only 20 containers, or about $600,000 worth.   The way the report reads, this is a good thing for Canada  – we’re selling them this wonderful hay, we’re selling live animals for their dairy herds, we’re advising on “best management” practices, etc.  It’s great that China is developing a dairy industry, if that’s what they want.  Canada’s been shipping hay for quite a while to various places, and not in huge quantities by global standards (the US ships far more), so the small quantity going to China is really not news.  Why does this bother me? It’s not just about the hay.

It’s about the words “agricultural co-operation”.  The North American continent has wildly diverse geography and climate, so regional specialization is pretty much a given.  Don’t get me wrong.  Self sufficiency is one of the most important goals my family has, and we believe it should be the goal of every community too.  But consider this.  If our communities were all completely self sufficient and self sustaining, and global trade didn’t exist, which is a scenario I like to dwell on in my more utopian daydreams,  my children would never have seen or tasted citrus fruit, bananas, pineapples, almonds, pecans, olives, chocolate, or many spices.  I would never have tasted coffee!   None of those things will grow in my climate without huge inputs of heat, water, light, and even then, not all of them are possible – olives for example.   Many people who do the locavore thing (myself included) have a list of exceptions based on this whole issue.  Without regional trade, I could still feed my children a healthy and varied diet from what is available locally, but our winter diet would be a little repetitive. And of course, there are many parts of the world right now where people never see some of the local foods my children take for granted.  Despite my locavore aspirations, I do buy California oranges occasionally, mandarins at Christmas and definitely chocolate!  As a complete aside, if you want to see some really great visuals on regional eating and what people spend on food in other places, have a look at Peter Menzel’s book, “How the World Eats“.  So despite my locavore and self sufficiency beliefs,  I think regional trade is a pretty natural outcome of diversity.

But here’s where I disagree with “agricultural co-operation”.  Canada exports frozen whole broilers to China.  We import processed chicken from China.  Why in the world?  Canada raises beef.  A lot of it for the domestic market but we export beef too and import even more.  Why, why, why? I know it’s called the global economy which would fall apart without trades like this.  And I’m not an expert on economics, for sure.  Canada isn’t alone in doing business this way – The US and Australia do huge amounts too.  In Europe, the EU requires England to carry milk in it’s grocery stores from other countries, even though they have more than enough dairy to supply themselves (or they used to before the common market concept!).  It may be the global economy, but it’s crazy stuff.

To get back to my concern about the hay going to China.  What do they get to sell us in return?  What does agricultural co-operation mean in this context?  Is Canadian hay going into dairy cows there and coming back to Canada as ice cream? or cheese?  Stuff we already produce plenty of domestically?  Is the government thinking this through?  Nope, they’re just thinking about the dollar signs.  Speaking of which, does anyone else think this will make the domestic price for hay go up, since the export price is already increasing?  How are we ever going to get people to buy into buying local when governments can’t even manage it within their own countries or regions?

One last thing.  Overseas buyers are interested in buying up agricultural land in Canada.  This article might raise your hackles as it does mine.  If XYZ  company from wherever owns 1000 acres of BC rangeland, lets say, they could grow their own hay or beef, save the purchase costs, and ship it to themselves.  That’s the best case scenario.  Because really, think of all the other things they could do with it too.

I know this whole rant is preaching to the choir.  Sorry.  But we who know our right from our wrong have to be vocal about it.  Educate our customers, our friends, our families. Grow our own food, raise our own meat.  Write letters to MPs, write blogs to the world.  Get the word out there.  Raise our children to have strong values and to question those who don’t.  Live our lives like this stuff matters.