thanks to the Story of Stuff Project

I just really liked this poster.  I could say a lot of stuff about…stuff.  But you already know it anyway.

Let me give you this question to ponder, though:  If stuff like plastic cutlery, paper plates, paper towels, cleaning agents, swiffers and processed food are meant to save us time, what are we doing with all that saved time?

Is it worth the price we’re paying environmentally ?  It’s not just the oil extraction, there’s also the plastic manufacturing process, the packaging process and the waste disposal issue.

If you haven’t already seen the Story of Stuff, it’s about 20 minutes and worth watching. 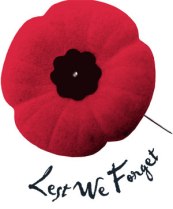 At 11 am on November 11th – on the 11th day of the 11th month at the 11th hour – take a minute in your day and hold in your mind people in your past or present who have fought in wars or battles on behalf of their country and their families.  Many died fighting, many lived to come home and raise families, and honour their dead friends.   Many came home maimed, in body or spirit, no longer completely whole.  Remember them.

On my mother’s side, my grandfather’s father returned to England to fight as an infantryman and came back from WWI shell shocked – we’d call it PTSD nowadays – no longer able to support his family, a stranger to his sons and wife.  My grandfather himself served in WWII in the Royal Canadian Airforce as an adjutant – in his 30’s, he was too old to serve in a more active role, but his squadron’s first tour of duty was in the Aleutian Islands (the most northern islands in Alaska) in a joint defence with  the US.  His bomber squadron was later sent to England where his civilian training as a teacher landed him an office job mainly writing letters of condolence daily to new widows and mothers of dead sons, and putting together those young mens belongings to be mailed home, all the while trying not to think of his own wife and daughter back home.

My Dad was age 20 when WWII broke out, and had recently completed his training as a navigational officer for the merchant marine.  He served very briefly in the RNVR, but soon transferred to the RNR and served most of the next 5 years in convoy duty in the North Atlantic, much of that time in a destroyer called HMS Burnham, an old 4 stacker that was part of the Lend Lease agreement.  Prior to the Burnham, he had been in a ship that was torpedoed and sunk and could never bring himself to talk about his feelings or describe what it was like floating in u-boat infested freezing, oily ocean, hoping – praying – that an escort would come and pick up survivors.  If you know anyone who served in war, you’ve probably noticed that they tell a lot of funny stories, but you won’t hear much about the harsh realities.  But look at their faces, notice the lines, the distant look in their eyes when one funny story leads to a sudden memory of a lost friend, or a time too horrible to bring back.

My husband and I both served several years in peacetime with the Royal Canadian Navy.  In the many years of standing stiffly in platoon at the cenotaph, toes and fingers frozen, hat dripping – I always watched the veterans greeting each other, back slapping, telling jokes, and then pulling their shoulders back, and standing still, silent and remote.  The veteran’s platoons are looking younger these days – men who served in the World Wars are gone or too frail to stand in the chilly November weather.  The men and women in the vets ranks now have served so many places in the last 30 or more years – Korea, Afghanistan, peacekeeping in the Middle East or Cyprus, Haiti, and more.   It doesn’t matter when they saw action – their faces are always the same, young or old – distant, inward focussed.   They all know they are the lucky ones.

My girls know these things.  I make sure I bore them with it every year, like a catechism.  I want this to be ingrained in them.  Both my father and my grandfather lived long enough to share some of their stories with the girls themselves, which helps.  Many of their friends have no contact with anyone who served in the “great” wars, and thus have a tendency to shrug off any requests for respect on this day.  One once wore poppies all over her jacket, thinking it funny.  Her parents didn’t think it mattered.  I was shocked.  Maybe they were right though.  They’re just little red flower pins – meaningless in themselves.  But they stand for something so much bigger.  A tribal memory – a retelling of our past that we have to make sure gets passed down.  Honouring those who served and fell is not just about thinking about them, it’s about making sure we and those who come after us don’t let all that pain and anguish and exhaustion, fear, despair, mud, cold, noise, and death be for nothing.  It is not to be taken for granted.

They shall grow not old,
as we that are left grow old:
Age shall not weary them,
nor the years condemn.
At the going down of the sun
and in the morning
We will remember them

We will remember them

A friend recently had an interesting request:  could he use our fields through the winter to do retriever training with his labradors?

We agreed, and they came the first time a couple of weeks ago.  R is training these dogs for retriever competitions, but he will also use them for some duck hunting for his freezer.  I got to watch R and a friend when they came two weeks ago, a very wet day, and learned quite a lot from them about what’s involved.  And then I got to watch again today, when R and his wife came.  It was grey but dry, much better for some pictures.

R has 5 dogs, mostly chocolate labs, 1 yellow lab.  They range in age from puppy to 6 years, and their focus, stamina, and attention to their owner are reflected in their relative age.

R heading down the field with a bunch of bumpers

Out in the field, training involves the owner, a helper and about half a dozen “bumpers”. They look like small coloured boat fenders with a short cord.  Some are covered in dull grey/green canvas to make them harder to see, and one today was a fake duck.  The owner and helper wear walkie talkies and dog whistles.  Today R used a duck caller as well.

The dog is required to sit beside one person calmly waiting for a signal to move.  The other person walks well down the field – our field is about 10 acres, and he went about 2/3 the way down.  Once down there he confirms by walkie talkie that the dog is still in control, then uses the duck call to alert the dog, and throws the first bumper out away from himself.  The person with the dog releases the dog by sayings it’s name and the dog shoots down the field like an arrow, heading straight for the bumper.  As soon as he’s picked it up, the person at the top of the field whistles and calls the dog back.  On arrival the dog is expected to heel and sit, still holding the bumper until told to “give”.  It gets thrown behind them and the process begins again.

Click to enlarge; R is down the field near the perimeter hedge. Sarge is pounding toward the bumper that R just threw near the clump of bushes further away

Sometimes the person throwing the bumper does things like hide in the hedge, and then throw the bumper.  Tricky.  Sometimes the bumper is thrown, but the dog is not released.  A second bumper gets thrown, and the dog is released to go get the more recent bumper, bring it back, heel, sit, give and then release to go find the first one.  That’s a huge test.  Half the time, I couldn’t remember where it had landed myself.  The dog has been trained to listen to the owner for hints, so if it really isn’t finding the bumper, a whistle will make it stop and look to the owner who will whistle again while pointing to the right area.

Each dog probably does about 6 or 7 retrievals, always at top speed, and they’re pretty tuckered by then.  But the reward for all that work is some fun with chasing the bumpers the way the rest of us would throw a ball or a stick for a dog, and the labs just love it, dancing and bouncing like they hadn’t seen such a fun thing to do in years.

Star, the blonde in the family, in an unusually calm moment

Even to my untrained eye, the difference in ability between the dogs is apparent.  Sarge, the male dog I watched today, was tense and focused, really working to not lose track of the bumper when it was thrown.  Star, the female, was far less focused, and kept wanting to return the bumper to R, who was the bumper thrower today, rather than back to the top of the field, to R’s wife.  So breeding, gender, training, and just the individual dog’s personality all play a part in whether a dog develops as a great retriever or not. 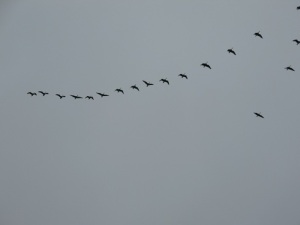 One of several vees that flew over while the dogs were here.

A bonus of the dogs appearing frequently in our fields like this is that we’ll probably be blackmarked by the local Canada goose population, and that’s a good thing.