A completely erroneous title – anyone who farms and has an off-farm job doesn’t have days off, they just switch hats.

We’re getting a lot of rain these days – it’s not called the Wet Coast for nothing.  I’m happy to have no end to my list of indoor things to do.  The following pictures describe how I spent a rainy day at home last week.  Just the fun stuff.

First off, I got some chicken backs out of the freezer (I bag these in pairs when I’m piecing chicken for home consumption), and put them on to simmer up for soup stock.

Next  I got the tomatoes started.  These are from my elderly neighbour – my crop is in the little metal bowl.  This is the second batch of tomatoes he gave me, and he’s had about 4 times what he’s given me for his own kitchen.

Matron of Husbandry who blogs at Throwback at Trapper Creek wrote a post a while back about a “glut” sauce she makes when she’s in tomato overload.  It’s a recipe from Joan Gussow Dye, and I found it numerous places on the web.  Matron had the best picture of it though.  I’m a sucker for pictures with recipes.

It took a little while to get 6 pounds of tomatoes chopped, along with some onion, celery and red pepper, but once done, drizzled with olive oil and balsamic vinegar, it went into the oven to roast, freeing me up to get started on applesauce:

Except that right after I brought the buckets inside, I realized I needed to get the crockpot going with the soup I was planning on for dinner.  The chicken backs had been simmering for about an hour, so the old hambone, split peas, onion, carrot and potato went into the pot, and got topped off with about 6 cups of stock poured directly from the stock pot.

That was dinner taken care of.  Now what was I doing with those apples?

The apple sauce used about 10 lbs of apples.  I had to leave the rest of the bucket for another day.  As soon as I had the apple sauce cooking down, I pulled the tomato glut sauce out of the oven, to cool down before freezing: 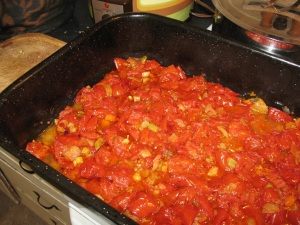 The glut sauce had only used about 2/3 of the tomatoes, so I froze most of the rest of them (whole, skins on), and the few remaining rejects got chopped up and stewed to make a topping for crostini to go with the soup later.  The chicken stock I hadn’t poured into the crock pot had cooled enough to skim.  I strained it into containers to freeze – about 1.5 litres (3 pints).  Picked all the meat off the carcasses – not a lot there, I’m getting better at piecing chicken, obviously – about 2 cups worth, which got put in the freezer next to the stock, ready for a future soup or stew.

The apple sauce made 2 litres to freeze, plus enough for dessert at suppertime.

The soup was wonderful, and fully appreciated by the kid with the sore throat.

Our  freezers, which were already pretty packed, are now filled to busting.  Guess we’ll just have to start eating.  Which is of course, the point of it all.

What “they” were encouraging us to do in WWII

What individuals are choosing to do for themselves in 2012 (thanks for the picture, Gavin!)

The girls have been helping me with jam and canning the last couple of years, but this was the first year where I really stepped back and just kept an eye on things.  Which meant I got to take pictures of the process.

I follow the instructions from Bernardin, the Canadian answer to the Ball Company.  I use regular pectin and white sugar.  I know, I know.  But remember that I’m fulfilling two purposes today – I’m stocking my larder with homemade jam for the winter, but I’m also training my girls to be able to this themselves, someday for their own larders.  I want guaranteed success at this stage, not the up and down results of experimentation.  And some of what they learned today made them ask questions about the ingredients.  Hands on is the best way to learn. 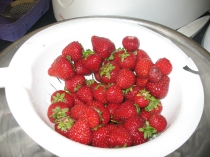 Really, they love each other

Wow Mum, there’s a lot of sugar in jam! Yup… 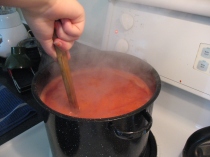 Rolling boil for a full minute, are you serious?

Does finger tight mean your fingers or mine?

Science at work, creating a vacuum 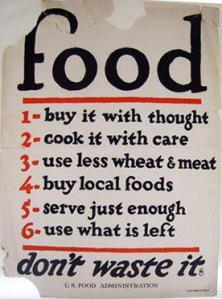 Before Michael Pollan and his famous “Food Rules”, there was….the FDA! Who knew?