an attempt to be artistic

I knew it was coming, the busy part of my farming season. I remembered the rhythm of it from last year, and knew what to expect, but it still hit hard, I think because of the heat we had this summer.

We started quietly enough, just the layers we have had for more than a year. In May, the two piglets arrived, and chores increased slightly. Things were still pretty easy though – the piglets were small and easily contained for a month, eating enthusiastically, but nothing like what they would consume in just a few months. In early July, the 75  new layer chicks arrived and we were tending the brooder as well as the pigs and layers. We butchered a few layers over the course of a couple of weeks, in preparation for giving the hen house and runs a rest before the new flock was to occupy it in the fall (that would be now) fully intending to get the rest of them a couple of weeks later, which never happened. By now, the pigs had been out on pasture for a bit, and daily fence checks were required. They were eating a lot more, growing fast.

At the end of July, just as the really hot part of the summer hit us, 150 broiler chicks arrived and we were hopping. We had 225 chicks in the brooder, in different pens, and it was a nightmare trying to keep the temperature right in there, keep on top of bedding, etc. Chores were now four or five times a day. We left for our anniversary jaunt to Pt Townsend for a couple of days, and the girls were exhausted managing everything on their own in the heat. Once we were back, the broilers went out on pasture and I thought things would settle down, but the heat meant the birds were drinking far more than they usually do out there, necessitating 3 visits daily to keep the 5 gallon water jugs topped up.

The fortissimo moment…One of the pigs had an allergic reaction in early September, causing a lot of anxiety and a vet visit, though by the time the vet saw her, the pig was her normal happy, assertive self. “Something she ate”, the vet suggested. Probably. The broilers went to the processor in late September, and the pullets immediately left the brooder (yes, they were still in there – and not happy about it) and took over the field pens. Things got calmer, even though I was still moving pens daily. The pullets handle the heat better, and in addition, the nights were cooler. The pigs got loaded up last Saturday night, and left Sunday morning for the abattoir – I was too sick to go, and felt very forlorn as hubby and Bryce departed up the driveway, one of the pigs gazing at me in puzzlement through the lattice on the back of the trailer. To suit my mood, the rain began that day and continued for about 4 days.

And suddenly, Autumn has arrived. A new season. I feel hope and optimism again, after months of feeling like I was just barely holding things together, rushing from water jug to bucket to hose, keeping gardens and animals hydrated. I’ve cooked two good meals in the past week after a season where I barely cooked a single meal – using the kitchen mainly to preserve fruit or throw my stuff down as I grabbed a cup of coffee. The pace is so different. My focus is on cleaning up and putting away, trying to think how I will want things in the spring. There’s paperwork sitting waiting for another rainy spell.  As I putter away at my quiet, mundane cleaning up tasks, I’m pondering next year – should I scale up?  Should I scale down?  What went well this year, what needs to change?  I’ve been reflecting all summer that my body had a tougher time physically than in years past – it’s only been the last month where I haven’t been falling into bed aching from head to toe.  Now that I finally feel physically adjusted, the need for all those adapted muscles has ceased, and it has occurred to me that maybe I should get into a strength training class or something so that I maintain some minimum level of strength for next season.

It’s not over precisely – those darn old layers are still hale and hearty, escaping all over the place and grudgingly producing 5 or so eggs a day (18 birds). I don’t have much longer before the serious wet weather begins, and I must have the pullets off the field by then. Garlic needs to go in the ground, and I’m still dithering about exactly where that spot is going to be this year. I picked my last bucket of tomatoes today so that I can dehydrate them, which will be an evenings work tomorrow night.  I have a few rows of potatoes left to dig up.   The pigs bedding needs to go out on the field, and I want Hay Guy to come and harrow the pig pasture a couple of times to level it a bit, so that I can throw some seed on it, and he can harrow it again. There’s some fence mending as well. And if the weather holds, I need to try and finish the eaves on the west side of the house. So it’s not over. But it has slowed down, and feels more peaceful. I’m ready for a bit of pianissimo. 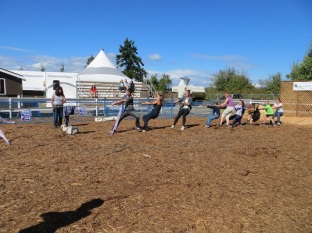 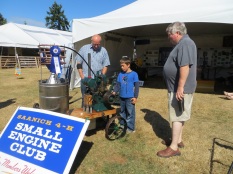 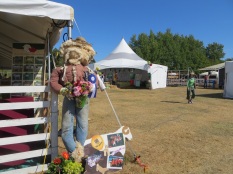 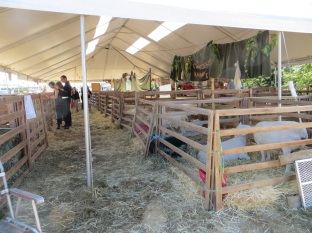 Another Maine X at auction 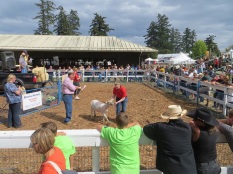 Lots of people at the auction, not a lot of buyers 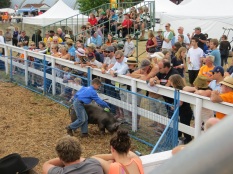 Absolutely the smallest seller at the auction
My camera battery died the first morning, so most of these pictures are from the last day, hence the predominance of 4-H folk. It was a great fair weekend, and a fine way to finish the summer.