We had a terrific storm in the night, wind booming in the chimney, torrential rain, the works.  I had seen the forecast and battened down the hatches at dusk, even remembering to bring in the wind chimes, so everything was fine in the morning.

In fact, it was a mild, pleasant morning, not quite sunny, but cool and calm.  I got started around 930 am, after a trip to the feed store for more wire, and continued with the fence between run #4 and #3.  By lunchtime, it was done!  It’s not picture perfect exactly, but it will do the job just fine, and it’s actually sturdier than the picture implies.  I did have to take a short break about 30 minutes before finishing, as I accidentally snipped my finger when I was cutting a piece of wire.  And being inside with clean hands made me think of coffee… 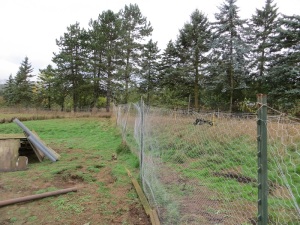 I usually failed target practice in the military, and apparently I haven’t improved – and staple guns are a whole lot easier to use, you’d think, anyway! I kept missing the wire I was trying to staple…

After a lunch break during which I prepped the veg for the squash soup I was planning for dinner, I got going again, this time to figure out how to do the gate(s) around the pop hole so that I could control which run the birds would have access to. I was a bit stumped, so took some dropped apples out to the birds in the field to give myself a change of pace, and on the way back spotted an old gate hanging off a post near our little old chicken house out back – swamped in blackberries.  It only took a few minutes to clamber through it all and pull it off it’s hinges.  A couple of nails and some wire and it will be just fine for one of my two gates.  And it provided the pattern for how to make the other gate.  Fifteen minutes with a saw and a drill, and the second gate was done.  I had a better accuracy score with the staple gun too, when I put the wire on.

Despite saying yesterday that I would be using three gates, I’ve figured out how to do it with two. Not only that, using a rebar fence post, I found the edge of the big rock that was impeding progress yesterday, and was able to pound in a T-post in a spot that will hold one of the gates beautifully.  However, the bigger, older gate still needs to have wire put on it, because around 4pm, the rain started again, and got serious within about 20 minutes, so I decided to call it a day and go get the squash soup going.

Just for show, it’s not attached to anything yet.

Tomorrow that gate will be finished, I will figure out how to attach them both, and the run will be ready.  I should be able to prep the lobby for them too tomorrow, and then maybe tomorrow night I can hire some family members and catch the birds in the field pens to install them in their winter quarters.

I guess because I’ve lived with the whole set up for so long, I didn’t really notice how patched together everything around here seems to be – in the photo of the gate, that plywood being held with a prop has been like that for years – the weather drives into the lobby kind of making it useless as dry shelter, so we put that board up “temporarily” and never did any more with it.  Part of the reason for that is that it has been a pain getting through the moveable fence “gates” that we’ve been using till now to get to this side of the hen house.  No more!  My new gates will change all that.  I hope.

Henny once again spent the day inside, I tossed her an apple which she accepted with enthusiasm, downy feathers wafting around her as she leapt down the perches to get to it.  She’s in for a shock when the pullets join her.