As I mentioned when outlining my Five Day Race, I actually had a jump start – I had some time last week to get the hen house swept out and ready for working in, and then on Sunday, the day before the race, I got most of the hole patching done.

So today, on the actual Day One, I got the wire stapled down over the whole floor and then got the cor-plast signs laid out again and spread three bales of shavings.  That felt pretty good, I’ll admit – the rat holes have been bugging me for a year, but until I got the old bedding out last weekend, I couldn’t really get at them properly. 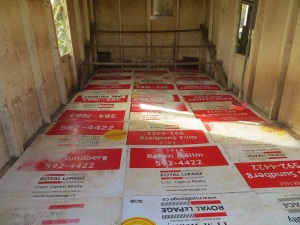 The wire is to make it harder for the rats.   The old real estate signs are very useful – in this case I use them as a moisture barrier to protect the wooden floor, and now also the wire, as the deep bedding will stay there till late spring.  The signs will also make it easier to clean the house out later, as trying to scrape deep bedding off the wired floor would/will be a pain.  We thought of sandwiching the wire by adding more plywood on top, but the floor has some squishy spots and the ply we have is 1/2 inch, which is pretty heavy, so topped with a season’s worth of deep bedding would probably cave the floor in completely.  This year’s efforts are truly just “hold it together” type patching jobs.

We bought the hen house as a DIY shed kit about 8 years ago (I think).  We hemmed and hawed about the fact that the walls are particle board, but in the end we went for it, as it was on sale for a discount and we were on a very tight budget.  Considering how much rain we get, it’s really completely amazing that it’s lasted as long as it has, but readers who have stuck with me for a year or so will already know that I have made noises about having to get this hen house fixed/renovated/repaird for quite a while.  I said last year it was definitely happening, and then this year, I said we were taking the particle board off and replacing it with plywood.  We have the plywood, and the framing on the house is still sound, but the missing factor was time.

If we had done in all the old layers as planned back in June, the house would have been vacant through the summer and the pullets would have been in already for at least a month.  In fact, only about half the flock got processed in June, but we couldn’t get the rest done until two weeks ago, at which time the house finally became vacant.

Meanwhile, of course, the new layer flock, which arrived as day olds back at the beginning of July, were not remotely contained in the brooder by about the start of September, so the second the broilers were out of the field pens, I put the pullets into them.  My back groaned not so silently at the thought of moving those shelters daily for another week or two, but stoically has held it together for not just one, but in fact several weeks.  Ironically, it is now feeling better than it has in months, as long as I don’t sit still for too long. 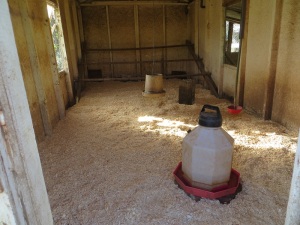 Today has been good.  The house itself is completely ready for the birds to move in right now, though I won’t be moving them till Wednesday night at the earliest.  I still have a lot of other work around the outside of it to do before the birds can go out in one of the runs, and it currently has no nest boxes at all, but it was a huge step forward today, especially considering that I also had to run our eldest daughter out to the university in the morning (three broken toes, and the bus stop almost 1 km away – so we’ve been giving her a lift for the last couple of weeks), and made use of the trip to also get groceries and feed, altogether about 3 hours of my morning.  I also got a set of sheets through the laundry and out on the line during my stop for lunch, taking advantage of an unexpectedly sunny afternoon.

Henny the House Inspector. Apparently she approved, as she took up residence tonight.

The hen house is not completely vacant.  One of the old hens got away on the last processing day and I wasn’t able to catch her. She’s been living out the last two weeks, bewildered and lonely, and this past few days has been hanging around the hen house.  I’ve decided she can have a reprieve as she will be able to teach the others how to roost (hubby says she’ll teach them how to escape, and he’s probably right), and she very gratefully took up lonely residence inside on the roosts yesterday and again tonight.